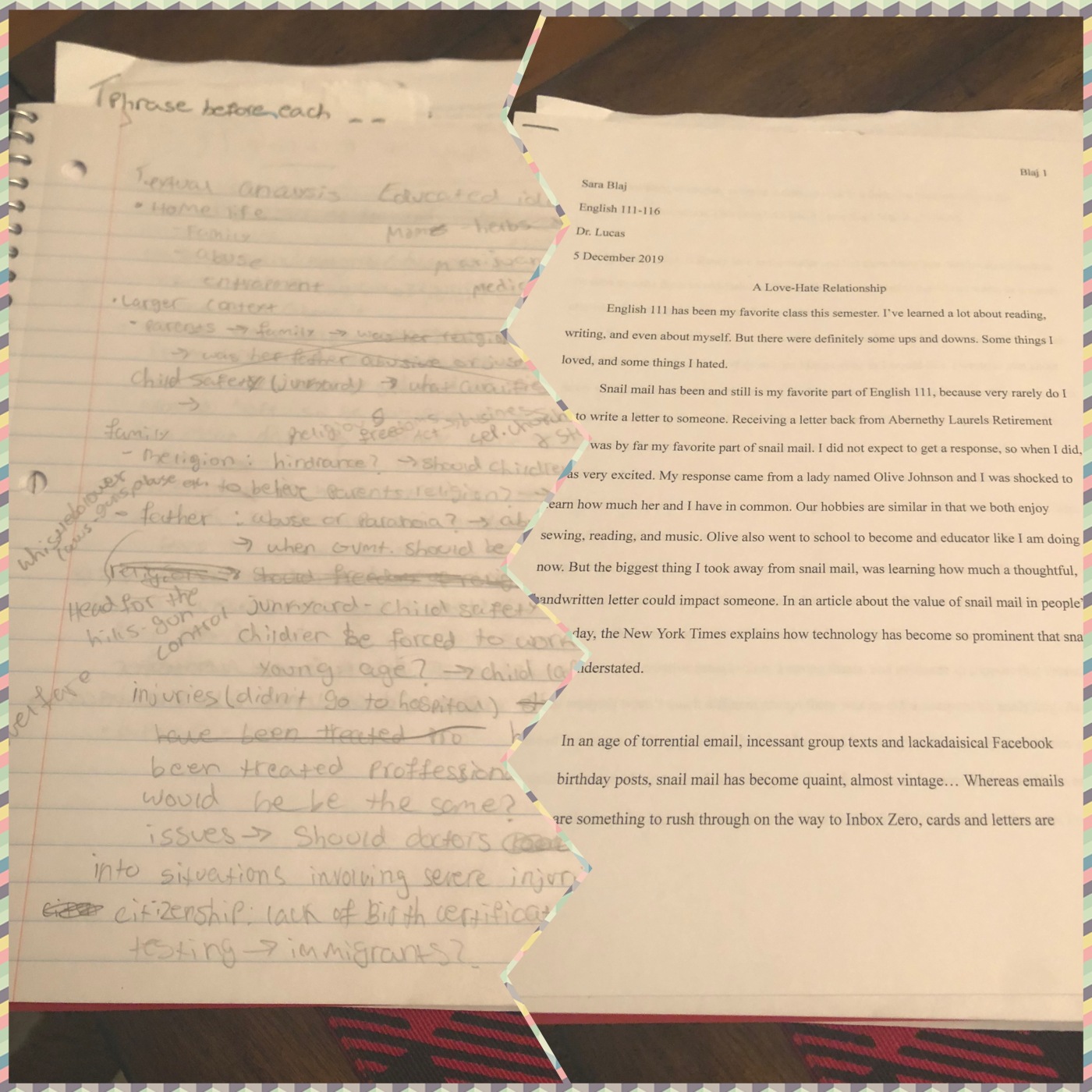 English 111 has been my favorite class this semester. I’ve learned a lot about reading, writing, and even about myself. But there were definitely some ups and downs. Some things I loved, and some things I hated.

Snail mail has been and still is my favorite part of English 111, because very rarely do I get to write a letter to someone. Receiving a letter back from Abernethy Laurels Retirement Home was by far my favorite part of snail mail. I did not expect to get a response, so when I did, I was very excited. My response came from a lady named Olive Johnson and I was shocked to learn how much her and I have in common. Our hobbies are similar in that we both enjoy sewing, reading, and music. Olive also went to school to become and educator like I am doing now. But the biggest thing I took away from snail mail, was learning how much a thoughtful, handwritten letter could impact someone. In an article about the value of snail mail in people’s lives today, the New York Times explains how technology has become so prominent that snail mail is understated.

In an age of torrential email, incessant group chats and lackadaisical Facebook birthday posts, snail mail has become quaint, almost vintage… Whereas emails are something to rush through on the way to Inbox Zero, cards and letters are something to cherish; to set on a desk, to stick to a fridge, to bind into a book for future generations (We Could All Use a Little Snail Mail Right Now).

Snail Mail has value. It shows love to the reader and lets them know you care because you took the time to write them an old-fashioned letter. This was revealed to me when I wrote to someone else who does not receive snail mail very often.

For two snail mail assignments I wrote to my Grandfather. He lives in Statesville, which is about thirty minutes away, so I do not see him as often as I would like. I wrote to him about funny events involving some chickens on his farm as well as the things I enjoyed most whenever I visited him. During one visit I realized how much a letter like that can impact someone. He recalled things I wrote in my letter without even looking at it and just sat there and smiled. It warmed my heart to see that because a man his age does not live the easiest life. He has some health issues and just seeing him smile and laugh brought joy to my life like the letter did him.

Snail mail was one writing assignment I actually enjoyed. The majority of writing assignments in English 111 were essays. There was one essay in particular that I strongly disliked; the textual analysis. Writing papers has never been a huge struggle for me because I’ve been doing it the same way since middle school. From what I have learned, a standard, good, essay consists of a creative introduction, a strong thesis, and evidence to support that thesis. The textual analysis wasn’t much different except there was an extra component: analyzing. At the start of my paper-writing process I had no idea what I was supposed to analyze. I’d been so used to writing essays about topics I was assigned that I forgot there is room for creativity in an impersonal essay. So I turned to my Norton Field Guide To Writing textbook for help. I turned to the section titled Arguing a Position and learned that while an academic essay such as an analysis should be free from opinion, one’s opinions can be used to develop the subject of the essay (Bullock 172-173). So I thought about what aspect of Educated, the book we were analyzing, stuck with me the most and realized it was Tara’s home life as well as her lack of a proper education. I mainly studied the chapters where Tara was at Brigham Young University and I was amazed at how she kept pushing in her schoolwork when she had stomach ulcers, toothaches, no sleep and more. The next step was analyzing. I spent hours brooding over my own notes, scribbling down ideas and trying to make connections. It was a long and grueling process but eventually, it worked. I managed to analyze the choice of diction used in those chapters, and more, and connected those analyses to my thesis.

So yes, I did hate writing that paper, but I know it is not the last textual analysis I will ever write and I know it made me a better writer. So in a way, I am grateful for that awful assignment.

Since this class and I have had a love hate relationship all semester, the last thing I am going to talk about is the blog we had to start. The blog itself was actually a fun assignment because I got to share my personal and impersonal essays with the world. The thing I didn’t like was sharing a summary of those essays in front of my classmates and instructor. I’ve never enjoyed public speaking and while I know speaking in front of a room full of, at most, 25 people is not exactly public, I still hated it. This is kind of ironic considering I performed in high school plays for three years straight, but reciting a bunch of memorized lines in front of strangers is, for me, easier than having to give a short summary of a blog post to my peers with no practice prior to the event. The only way I managed to do it was by rehearsing everything I planned on saying, the day before. But like I said before the blog was not all bad. I had a lot of fun reminiscing about my high school theatre days in my introductory post, as well as writing about my inability to carry a conversation with some people, in my Mr. Perfect post. I surprised myself with this blog post because It made me realize that maybe I do have things I want to say to the world after all. Now my blog is a way for me to express my thoughts and feelings similar to a journal or diary. It’s completely public and I don’t mind that because not only do I want to share my funny stories and experiences, I want to share the lessons I’ve learned with the rest of the world and hope it will affect somebody out there in a good way. And I have English 111 to thank for that. Without that class and without Dr. Lucas, I never would have learned the things I did.

So despite the fluctuation between love and hate that I felt towards English 111 this semester, I have no regrets about taking it. It was a challenge, but one that I, and the rest of my peers in that class, rose to well. The assignments I hated were ones that I learned from the most, and the ones I loved made the class a more enjoyable experience. I will miss many things about English 111, but I look forward to the next english class I take knowing I can use the skills I’ve learned this semester, to help me succeed in the semesters to come.

2 thoughts on “A Love-Hate Relationship”